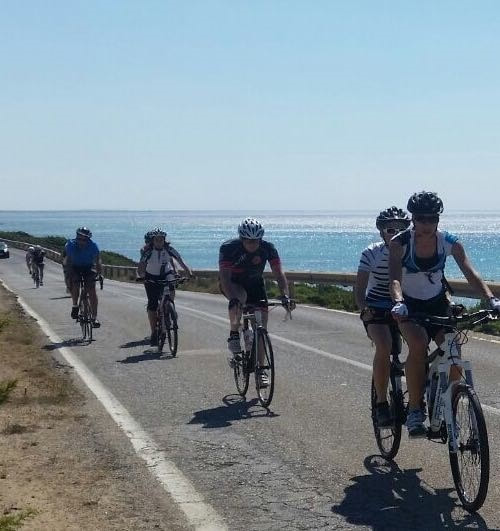 The Pulia region of south-eastern Italy has quite a story to tell, having been in the hands of the Greeks, the Romans, the Ottomans, the Spaniards and other colourful peoples, each which have contributed to the region’s dialects, flavourful cuisine, and distinctive architecture. This is Italy’s best kept secret for outstanding cycling. From Otranto, crossroads of culture, to the whitewashed houses of Ostuni reaching towards the rich blue sea; from the memorable conical roofs of the “Trulli” in Alberobello to the enchanting white sand beaches near Gallipoli, enjoy superlative rides through sparsely inhabited ancient olive groves, Mediterranean Mache and invigorating coastal roads with views that make you fall in love.

SKU:
contact us
<
>
Day 1: Arrive in Polignano a Mare
Arrive in the glorious town of Polignano a Mare overlooking the Adriatic Sea. Get lost in the labyrinth of streets amidst whitewashed houses. Visit the main church, known as Chiesa Madre, and the stunning, unique squares of San Benedetto and Dell’Orologio. Marvel at the Marchesale Arch, an original entrance to the old town, where the cycling itinerary commences.

Day 2: From Polignano a Mare to Alberobello
Distance: 40 km
Ride inland through the distinctive Apulican landscape, including a visit to the enchanting caves of Castellana. Continue to the Trulli capital of the world: Alberobello. The trulli, or white washed stone houses with conical roofs, are exceptionally intriguing and comfortable, as you will experience tonight when you sleep in one. The 1,000 trulli surround you such that you truly feel transported into another world.

Day 3: From Alberobello to Ostuni
Distance: 40 km
Ride through the historically rich “Murgia” area, amongst olive groves, southern vineyards and classic “Masserie” farmhouses. Pass the medieval town of Cisternino with its brilliant DOC wine, then on to Ostuni, a stellar town on the Adriatic Sea. You enter the heart of the city, pass its protective walls and gaze your eyes onto the gothic, fifteenth century cathedral. A majestic moment to treasure.

Day 4: Ride to Ostuni train station, train to Lecce and ride to Gallipoli
Distance: 55 km
This morning you cycle down to Ostuni train station where you catch the train to Lecce (1 hr). After leaving the train station in Lecce you soon approach the countryside, the ride is gentle, mostly on secondary roads surrounded by olive trees. When passing through small historic towns such as Copertino and Nardò take some time to visit the town centre or just stop for a coffee. Then, on the way to Gallipoli you can find some nice spots for a swim in the Ionian Sea.

Day 5: From Gallipoli to Santa Maria di Leuca
Distance: 50 km
A coastal road takes you to the southernmost point of Puglia, dividing the Ionian and Adriatic Sea. But first, take a swim in the turquoise waters of paradise, at the Torre del Pizzo beach and lay along the fine white sands. Then continue south to Santa Maria di Leuca, a magnificent village of fantastic beaches and wacky, wild, colorful mansions.

Day 6: From Santa Maria di Leuca to Otranto
Distance: 50 km
Revel in the sea breezes as you ride along the high coastal route, winding your way along gentle, undulating rift of the cliffs. Phenomenal views will make you feel part of a National Geographic cycling special feature. Stop for a glimpse of the spectacular cave, the Grotta Zinzulusa, and then on to Otranto, a Greek-come-Roman port town, frequented by merchants and thrill seekers.

Day 7: From Otranto to Lecce
Distance: 55 km
Today you visit the Alimini Lakes which run parallel to the sea. Cycle your way through the countryside of Greek Salento, where traces of the former colonies are still present in the dialect, cuisine and bright style of architecture. The whites shine against the euphoric blue of the sea. Arrive in Lecce, a brilliant city full of wonderful palaces and a treasure which will mesmerize you.